By Ryan McGeeney
U of A System Division of Agriculture
April 27, 2018

FAYETTEVILLE, Ark. – A brother-sister team of University of Arkansas students took the top prize in the agricultural division of a state-wide business plan competition this month with the “Roveround,” a device designed to help injured and aged animals regain their mobility. 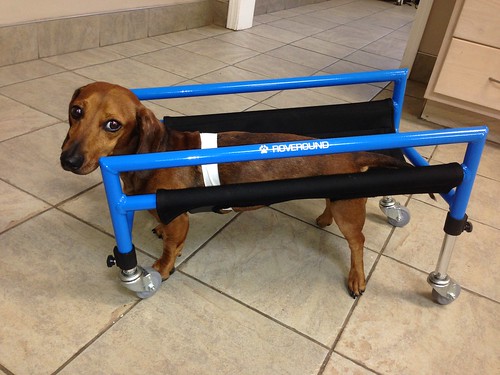 Cara Conner, a freshman in the Dale Bumpers College of Agricultural, Food and Life Sciences, and her brother, Grant, a senior in the Fulbright College, won first place in the agri division of the Arkansas Governor’s Cup Collegiate Business Plan Competition, competing under the team name Conner Innovation. The team was awarded $5,000 in prize money.

Cara, who is currently majoring in nutrition and dietetics and is pre-med, said she originally developed the idea for the Roveround in 2012, when she was attending seventh grade in Mountain Home.

“My parents own a veterinary clinic, where I met a corgi with bedsores and a herniated disc,” Cara said. “I asked my dad why he couldn’t just put her in a wheelchair — my dad pointed out why that wouldn’t really work. So I started thinking about how we could just take the pressure off her back and let her be more mobile.

“I decided that maybe I could make something that would work,” she said. “I had just participated in the Youth Entrepreneur Showcase in Little Rock the year before, in 2012, when I was in 6th grade. I got some PVC pipe and an old pair of jeans, and sewed a sling that would fit between the PVC frame. It was pretty primitive.

“From there, I added wheels, and used my cousin’s little dog to test it out. It worked pretty well, so I started modifying it to suit different dogs, and that’s how we got to where it is today, with an aluminum frame and a gusseted nylon cloth sling,” Cara said.

“The business plan itself is a 30-page monstrosity of business history, idea history, details on innovation, and financials, which is probably the most complicated portion,” Grant said. “You have to include monthly financials for the first five years of the projected company. You have to get a good grasp on what your target market is, and that analysis can be difficult at times — trying to gauge who you can reach with your product.”

Grant said the two will use the $5,000 prize money to catapult their operation from local, one-at-a-time construction of the Roveround to large-scale production with a manufacturer in Asia.

“We’ve created contacts in China who are sending us prototypes,” Grant said. “We’re jumping into large-scale, overseas production. The system itself relies on large orders — you can’t just order one at a time. You have to order about 250 at a time.

“The seed money allows us to jump ahead to plant manufacturing at a lower cost,” he said.