(Newsrooms - Images from the event are available here: https://www.flickr.com/gp/uacescomm/320Q0W )

LITTLE ROCK – Gov. Asa Hutchinson said he hoped entry of Arkansas youth into the Congressional Awards program would signal the “start of a lifetime of service.” ­­ 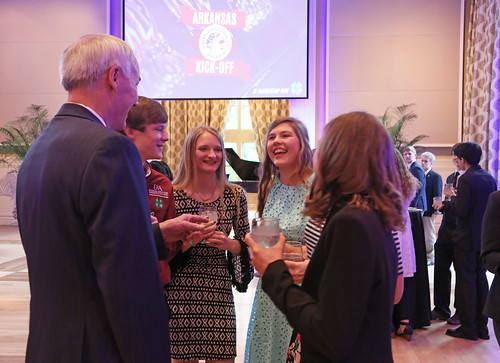 MEETING -- Boone Co. 4-H members chat with Gov. Hutchinson at the Governor's Mansion. Hutchinson hosted the Arkansas kickoff for the Congressional Awards on April 21, 2018. (U of A System Division of Agriculture photo by Mary Hightower)

On Saturday, 4-H members from across the state took part in a two-step event to mark the kickoff of the awards effort in Arkansas. The youth began with a service project at the Vines Center in the afternoon by writing notes of encouragement to the nation’s military personnel overseas and packing hygiene kits to send. The day wound up with an elegant evening at the Arkansas Governor’s Mansion.

“This was a wonderful opportunity for our 4-H youth,” said Martha Ray Sartor, interim associate director-Family and Consumer Science and 4-H Youth Development. “It is not every day they get to rub elbows with state and national leaders.  Hopefully, this event will inspire them to work toward their bronze, silver and gold medal awards.”

“The 4-H program and the Congressional Awards program are a natural partnership. Both programs see the value of record keeping as a way to measure progress throughout each step of their journey in the program,” said Angie Freel, interim associate department head-4-H. “Their accomplishments are rewarded with more than medals and scholarships. The youth have learned valuable life skills along the way that will stay with them forever.”

Among the VIPs in Little Rock for the Arkansas kickoff was Rodney Slater, former U.S. Transportation secretary who is a native of Marianna, and who now serves as vice chair of the awards board.

“It affords Arkansas youth the opportunity to be a part of a big community of youth across the country,” Slater said. “The Congressional Awards Foundation is Congress’s only award for youth and every year there are literally thousands of youth that are recognized and we want Arkansas youth to be part of that effort.”

Sen. John Boozman told the crowd he looked forward being able to award many medals next year.

“The partnership between 4-H and the Congressional Awards in Arkansas, I think is just an outstanding idea,” Boozman said. The two programs “complement each other so much. And so, as a result of that, I think we’ll be able to recognize a lot of young Arkansans in the future for outstanding service. Congressional award is a big deal -- not many given out. We do have many outstanding young men and women in Arkansas who would be able to compete and be successful.”

Boozman has plenty of insight into both programs: his children were all 4-H members.

“I have three daughters and they’re all grown. They were all in 4-H and all state record book winners,” he said. “It had a huge impact on our family. It was just a great experience for the whole family.”

Gov. Asa Hutchinson, himself a Benton County 4-H alumnus and host for Saturday evening’s event, said service to one another is what makes the state and country special.

“My service is temporary as governor, but you know, what is lasting is the service you render today,” he said. “The impact you have on others, the word of encouragement you gave to our men and women in the military overseas today; the fact that you took time to support them makes a lot of difference, because it’s your investment in people.

“We help each other in Arkansas and we volunteer,” Hutchinson said. “That’s what makes us a special state and a special nation.”

For more information about the Congressional Awards, visit  http://congressionalaward.org. To learn more about 4-H, contact your county extension office or visit www.uaex.edu/4h-youth/.