By Ryan McGeeney
U of A System Division of Agriculture
April 4, 2018

LITTLE ROCK, Ark. – Freezing temperatures moved into Northwest Arkansas early this morning, posing a threat to many fruit crops now in their vulnerable flowering stages in the area, University of Arkansas System Division of Agriculture horticulture experts said this week. 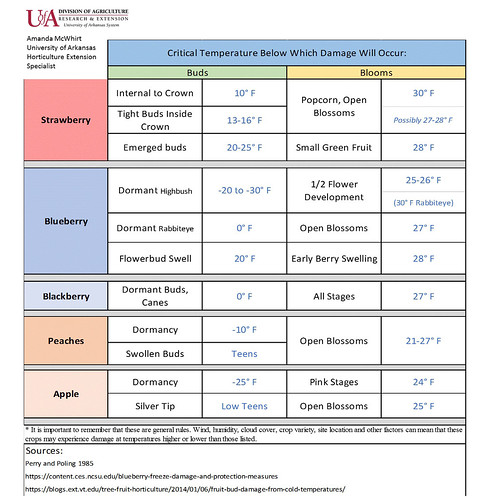 The National Weather Service reported the air temperature in Fayetteville at 36 degrees just before midnight, and dropping to a low of 27 just before 7 a.m. today. Amanda McWhirt, extension horticulture specialist with the Division of Agriculture, said strawberries, peaches and blueberries in certain stages of development could be damaged at those temperatures if not protected against the elements.

“Strawberries have already been flowering in the state for a couple of weeks,” McWhirt said. “If you have open blossoms out there, and the temperature drops below 30, it’s essentially going to kill the flower, and you won’t get any berries off of those flowers.

“We’re currently starting to see some bud emergence in blackberries,” she said. “You may see many of these buds die off before they even get to their flowering stage.”

McWhirt said strawberry growers should cover their crops with row covers or crop blankets, which will insulate the crops and raise the immediate temperature by as much as 5 degrees. While this is a common practice for strawberry growers, it can prove much more difficult to protect blackberries and peaches, given their respective plant and tree structures.

“Peaches have already bloomed in some parts of the state,” she said. “There are some protection options, but it’s a lot more difficult than strawberries, where you can just throw a blanket over them.”

She said that growers should scout fields and check crops as soon as possible, and take whatever measures are necessary and available to protect them through the freeze.

“The concern is that a lot of our crops are at the stage where they’re budding out, blooming, or have already bloomed, and we’re going to see temperature that can threaten them,” she said. “In some cases, it may just kill off early bloom, which is a delay for when the first crop comes off. Depending on the crop, and its stage of development, you could have some effects on the whole volume of crop, depending on how deep the freeze is.

McWhirt said it’s impossible to predict how much damage a hard freeze will ultimately impact this year’s fruit crop. In 2017, a March 18 freeze severely damaged much of the peach crop in some counties, destroying about 90 percent of the crop in Boone County and severely impacting Faulkner County peaches as well.

“A lot of early blackberry varieties in the northern counties got hit really hard, too,” McWhirt said. “But other, later varieties were ok, and still produced a crop. It basically just delayed when the season started.

“It’s sort of the same thing with peaches, where it killed off a lot of the early crop, or just thinned the crop naturally,” she said. “It’s hard to say right now what will happen. There will probably be some losses, but we hope it won’t wipe out everything.”