By Mary Hightower
U of A System Division of Agriculture
April 1, 2015

“We've had feral hogs in Arkansas for more than a 100 years,” said Becky McPeake, professor and extension wildlife specialist for the University of Arkansas System Division of Agriculture. “Feral hogs generally kept to the southern bottomlands, but today, feral hogs are found in every county of the state.”

“We can only speculate why they have moved so rapidly across the state, which seems faster than what we would expect normally from a naturally dispersing population,” she said. “Many experts guess that sports hunters have released domestic hogs in other areas of the state to expand their hunting opportunities, which is an illegal practice today.”

Arkansas provides an ideal place for the highly adaptable hog to thrive, with plenty of water, food and shelter. McPeake said a pregnant feral sow can produce an average litter of six, and thanks to rapid maturity rates, within a year, “you could potentially have 31 pigs on your property from just one sow.”

McPeake said feral hogs have recently been seen north of the Arkansas-Missouri border, and that extension agents in northwest Arkansas have reported a significant increase in calls regarding feral hogs.

“One Searcy County producer described it as World War III,” Armes said. “At this particular farm small craters dotted every pasture like mortar fire on a battlefield and three to five acres around the home and even the yard, was completely devastated.”

Armes said he’s been working to raise awareness of the problem and impress on farmers the need to find an efficient way to control the hogs. 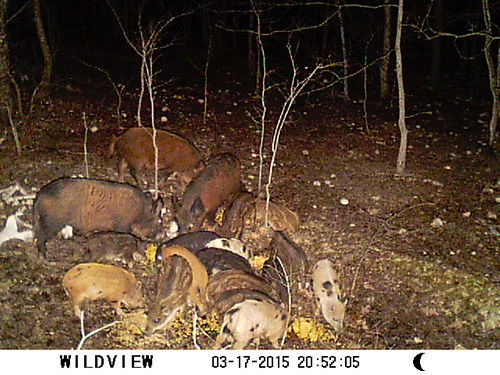 FEAST -- Wild hogs rooting around in Searcy County, Arkansas. Their populations have exploded across Arkansas. (U of Arkansas System Division of Agriculture photo by Skip Armes).

“In Boone County, the feral hog issue has risen dramatically in the past two years,” said Mike McClintock, Boone County extension agent for the Division of Agriculture. “This past fall I received calls about hogs ruining entire 20-acre plantings of summer forages and ruining hay/pasture fields. I would say it is becoming epidemic in certain areas of Boone County. Hunting the feral hogs is not getting it done.”

A 2013 study done by Texas A&M estimated the cost of feral-hog damage to Texas farmlands to be $52 million plus another $7 million for repairs and control methods. (http://overton.tamu.edu/files/2013/06/Wild-Pig-Damage-Abatement-Education-Applied-Research-Activites.pdf )

The Cooperative Extension Service and the Arkansas Forest Resources Center are working together, and with support from a USDA Natural Resources Conservation Service grant, to provide materials and workshops for landowners interested in alleviating damage to their property.

The first workshop is set for May 9 at the Durand Center in Harrison.

"Removing feral hogs isn't easy,” McPeake said. “It takes planning and developing a strategy; in other words, preparing a course of action based on what we've learned from science and research, adapting it to your circumstance, and sticking to it."

Although shooting and hunting can remove a few hogs, the primary strategy discussed at the conference is corral trapping. Representatives from the Division of Agriculture, USDA Wildlife Services, and Arkansas Game and Fish Commission will give presentations and set up trapping demonstrations.

Registration is $5 to cover lunch. Seating is limited, so attendees are encouraged to register early. Contact the Boone County Extension Office to register, 870-741-6168.

A publication titled "Feral Hog Control in Arkansas" can be found on our website by searching for "feral hogs” or by downloading from: www.uaex.edu/publications/pdf/MP534.pdf.  Other publications about feral swine brucellosis, and feral hog laws and regulations, are also available.