The National Weather Service at Little Rock received reports of 2.75-inch hail, high winds and issued tornado warnings for Arkansas, Desha, Jefferson and Lincoln counties Tuesday afternoon. The weather service reported a funnel cloud near Gould, damage to a mobile home near Gillette and a shed blown across a field near Arkansas Post. 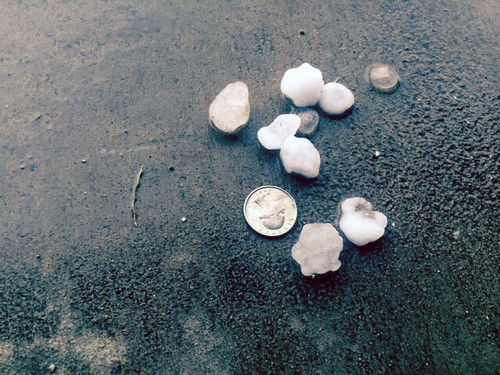 HAIL -- Large hail that fell in Clay Co., Arkansas on March 31, 2015. (U of Arkansas System Division of Agriculture photo by Andy Vangilder).

The weather service also forecasted storms for Wednesday evening and Thursday, listing hail and damaging winds as the primary threats.

“We got a lot of rain last night that has brought planting to a halt again,” said Andy Vangilder, Clay County extension staff chair at Piggott for the University of Arkansas System Division of Agriculture. “We got a few acres of corn planted in the last couple of days, but not much.

“Most guys are fertilizing wheat by air and spraying burndown herbicides in fields where they could get across them,” he said.

Hail that fell during the day prompted Vangilder  -- who was checking a client’s pasture -- to seek shelter in a shed. “I had to get in a shed because it started hailing and hailed for a good 20 minutes. The ground was covered by dime to quarter-sized hail,” he said, adding he didn’t note any hail damage.

In Stuttgart, an isolated but intense storm rolled through, putting the kibosh on plans to plant a test plot at the Rice Research and Extension Center.

“It was one cell and it just came a downpour,” Jarrod Hardke, extension rice agronomist for the University of Arkansas System Division of Agriculture, said Wednesday morning. “We have standing water. My crews are not going to be able to plant this morning, and there’s more rain expected this afternoon and again on Friday.

However, Hardke said that at farms north and south of the center, planters were still rolling.

Wednesday’s forecast storms were not expected to affect the second day of the two-day agricultural aviator fly-in at Carlisle airport, said Keith Perkins, Lonoke County extension agent for the Division of Agriculture. Abundant rain has slowed planting activity in his county, but not stopped it.

“Any day now, we’re due to miss one of these rains,” he said, with a laugh. “If we don’t, we will work until we get rained out. As my cousin Roy would say, ‘hurry every chance you get.’ Well, it’s time to hurry.”