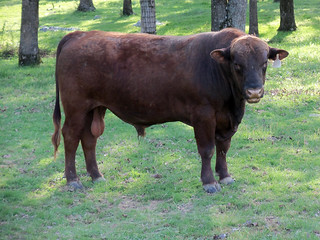 All bulls should pass a breeding soundness exam every year. (UAPB Image)

PINE BLUFF, Ark. – “A $100 investment in your bull can provide a big return when each calf is worth more than $1,100,” says Dr. David Fernandez, Cooperative Extension Program livestock specialist at the University of Arkansas at Pine Bluff.

A breeding soundness exam, or BSE, costs about $50 and a trichomoniasis, called “trich” and pronounced “trick,” test runs about the same. With October futures for 650-pound calves hovering around $182 per hundredweight, a single calf saved will more than pay for the cost of the tests.

As breeding season approaches, Dr. Fernandez is urging beef producers to schedule trich and breeding soundness exams for their bulls. Generally, between 10 to 20 percent of bulls fail a BSE a year, he says.

“At one BSE clinic conducted by Cooperative Extension, I saw four out of five bulls brought in by one producer fail. And the bull that passed was the youngest and least likely to breed cows. Imagine what a poor calf crop, the rancher would have had if he or she had not culled the bulls that failed,” says Dr. Fernandez.

Breeding soundness exams should be conducted on all bulls every year. Young bulls, under 18 months of age, frequently fail a BSE, yet mature into sound breeders as they progress through puberty. Older bulls may fail a BSE because of injury or disease.

A BSE examines the ability of a bull to physically move about, maintain himself and breed cows. The veterinarian will examine the bull’s feet and legs, eyes, mouth and teeth, and body condition. He will also examine the bull for any injuries that may make him unable to copulate.

After the general exam, the vet will measure the bull’s scrotal circumference. Bulls with larger circumferences are more fertile and have daughters that are more fertile and mature earlier. The vet will collect a semen sample and determine the percent motile sperm and percent normal sperm. To be classified as a sound breeder, a bull must have at least 30 percent motile sperm with at least 70 percent normal sperm and a minimum scrotal circumference. If your bull does not meet these criteria, have him tested again in 30 days advises Dr. Fernandez.

Testing 30 to 60 days before the breeding season in June gives your bull a chance to retest or you have a chance to replace him. It is not uncommon for a bull to test satisfactory after failing earlier in the year. Do not sell a bull that has failed a BSE to another farmer for breeding, says Dr. Fernandez.

If you opt to purchase a new bull, be sure he has passed a BSE this year. The Arkansas Livestock and Poultry Commission requires all bulls entering Arkansas from out of state be tested for trichomoniasis. Trich can cause very low fertility, low pregnancy rates, extended breeding seasons and low calf crops. The test takes several weeks so be sure to line up a new bull early enough for testing. Make sure you are not purchasing a problem bull from someone else.

Make sure that the bull you have now will get the job done for you this breeding season. For more information about fertility testing or other livestock questions, contact Dr. Fernandez at (870) 575-7214 or via email at fernandezd@uapb.edu.