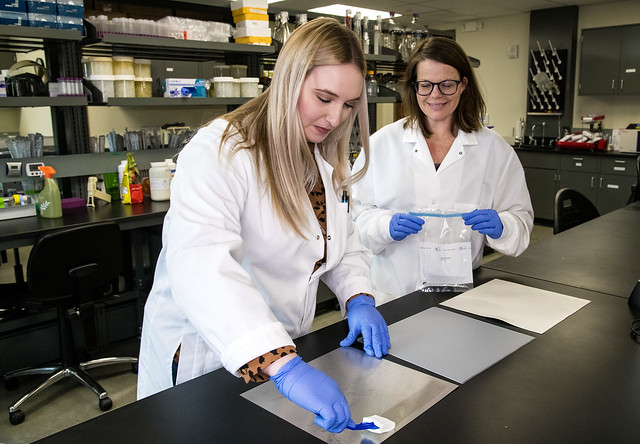 At the crux of the issue is the variety of materials and shapes of swabs used to collect samples from surfaces, said Gibson, who is an associate professor of food safety and microbiology for the Arkansas Agricultural Experiment Station.

“Food recalls because of contamination are based on finding pathogenic microorganisms in food industry workspaces,” Gibson said. These microorganisms are typically bacteria that can cause illness in those who eat the food products, she said.

Individual companies have different preferences in the swabs they use to check work surfaces. Gibson said the most common swab materials are cellulose and polyurethane foam, but there is little research-based information on their performance.

An effective swab must capture microorganisms from a variety of surfaces, Gibson said. Then it must release them into an elution buffer, a liquid medium that is used to remove the samples from the swabs and analyze them for the presence of pathogens.

The FDA’s Food Safety and Modernization Act requires environmental monitoring but sets no standards for tools or procedures, said Sarah Jones, a Ph.D. student in Dale Bumpers College of Agricultural, Food and Life Sciences at the University of Arkansas.

Jones is conducting her graduate research with Gibson, investigating the effectiveness of cellulose and polyurethane foam swabs. Her goal is to determine which material is best suited to pick up microorganisms from a surface, release them for analysis, and effectively remove operator error from the process.

Because different food processing environments have varying conditions, she is testing the swabs on different surfaces and using controlled environments to test swab function under varying temperatures and humidity levels.

Cellulose swabs, she said, have demonstrated considerable variability in their ability to lift microorganisms and release them.

“Many food companies have stopped using cellulose,” Jones said, “because it is prone to breaking apart on coarse surfaces. But some companies continue to use it.”

Jones inoculates the swabs, applying the bacteria directly onto the material, to measure how effectively they release the pathogens when placed into elution buffer.

“We get a higher rate of release from the polyurethane foam, but we don’t know why. We want to explore ways of improving sensitivity of the materials,” Jones said.

Effectiveness of capture and especially of release also varies depending on the microorganism present, Gibson said. They use two common bacteria in their research — Salmonella Typhimurium and Listeria monocytogenes.

“Their cell membranes are different,” Gibson said, “and we think they interact differently with the swab materials. But we don’t know the root cause of the recovery and release not being equal between the microorganisms.” Gibson said similar variability is expected when monitoring for viruses.

The FDA does not require food companies to monitor for viruses because they tend to be host-specific and not given to contaminating different kinds of foods. Testing for viruses is most useful for discovering patterns of contamination and transmission during a viral outbreak, Gibson said.

Gibson said the variability in capture and release between different microorganisms raises questions for further investigation. “What can we do to make these materials work equally for different bacteria or viruses? Or should we use different materials and design swabs specific to each pathogen? What might make them want to release?”

One possibility to investigate is that, under ambient conditions, most microorganisms have a negative charge, Gibson said. It’s possible that could play a role in binding to surfaces.

If that proves to be true, Gibson suggested, swabs could be prepared with a positive charge to attract them. The charge could then be reversed in the elution buffer to separate the microorganisms from the swabs.