FAYETTEVILLE, Ark. — Adisseo, a France-based company and a world leader in animal nutrition, has endowed a professorship and funded three poultry science research projects for the University of Arkansas System Division of Agriculture. 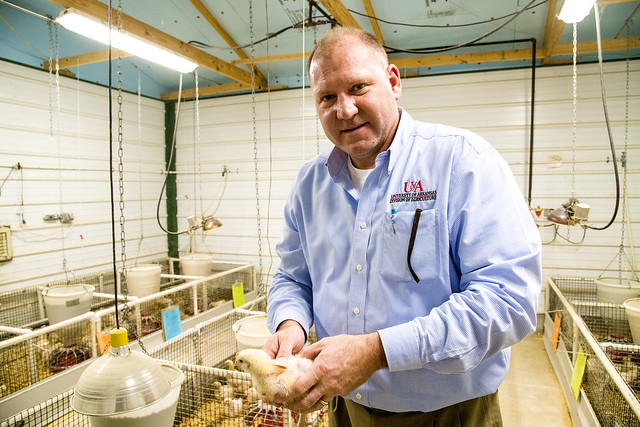 Michael Kidd, professor of poultry nutrition, was named to the Adisseo Endowed Professorship in Global Sustainable Poultry Nutrition. The endowed position is a research professorship in the Arkansas Agricultural Experiment Station, the Division of Agriculture’s research arm.

The company also provided grants to fund three research projects in the Division of Agriculture’s Center of Excellence for Poultry Science.

“The close collaboration we began with Adisseo in 2018 established a partnership that promises to be highly beneficial for independent research and its translation into industry application,” said Mark Cochran, vice president-agriculture for the Division of Agriculture.

“We’re very proud that Adisseo selected Dr. Kidd for an endowed professorship that will support a broad view of poultry health and nutrition research with meaningful impact for the poultry industry and global agricultural sustainability,” Cochran said. “The research grants, as well, demonstrate Adisseo’s commitment to important independent research that will benefit animal health and well-being, and the poultry industry as a whole.”

“The endowment for Dr. Kidd and support for other important poultry research benefits both the Experiment Station and Adisseo,” Meullenet said. “The industry benefits when product development and testing for improved poultry health and nutrition is built upon a foundation of unbiased, basic research.”

“Adisseo’s support for faculty and graduate students to work directly on research with immediate impact is impressive,” Caldwell said. “It identifies their commitment to commercially relevant research programs, and we’re thrilled to be a partner with them.”

Caldwell also praised the choice of Mike Kidd for the endowed professorship.

“As a poultry nutritionist, Dr. Kidd is highly valued in the industry,” Caldwell said. “Recognition with this professorship supports that value, and he’s certainly deserving of such honor.”

Kidd said he is honored to have been chosen and grateful for Adisseo’s support.

“This professorship encompasses a broad view of poultry nutrition,” Kidd said. “There are major challenges in feeding a growing world population, and this endowment takes a global view of sustainability in the poultry industry.”

“It’s going to require collaboration overdrive,” he said. “We need everyone working on a different piece of the broader puzzle to get it done.”

Research by graduate students in the University of Arkansas’ Dale Bumpers College of Agricultural, Food and Life Sciences is conducted within the Agricultural Experiment Station’s research programs.

Kidd’s research program will include poultry nutrition investigation in the areas of amino acids, energy, minerals and vitamins.

“We’re looking at multi-disciplinary approaches to increase feed efficiency, reducing nitrogen and carbon footprints and water use, and other areas of poultry health and nutrition,” Kidd said.

The research projects for which Adisseo has provided grants support the “collaboration overdrive” Kidd anticipates. The grants have been awarded to key projects led by widely respected Division of Agriculture researchers:

Stefan Jakob, director of research and innovation in nutrition and animal health at Adisseo, said, “Adisseo is proud that we have teamed up with the University of Arkansas System Division of Agriculture, having developed a model that is going far beyond usual industry-academic relations. Both partners share responsibilities, governed by a common steering body, and thus it is a truly unique model and a science and business accelerator.

“We consider this partnership as a cornerstone in our research and innovation programs, which contribute strongly to Adisseo’s vision of feeding the planet in a qualitative, affordable, safe and sustainable way.”

Cochran and Jakob signed a memorandum of understanding in October 2018 to establish an endowed professorship in the division’s department of poultry science.

A second agreement to expand collaborative research in poultry health and nutrition was signed in February 2019. Meullenet, Jakob and Jean-François Rous, executive vice president of research and innovation for Adisseo signed that agreement.

Adisseo is one of the world's leading experts in feed additives. The group relies on its 10 research centers and its production sites based in Europe, the United States and China to design, produce and market nutritional solutions for sustainable animal feed. With more than 2,200 employees, it serves around 3,900 customers in over 110 different countries through its global distribution network.

Adisseo is one of the main subsidiaries of China National BlueStar, leader in the Chinese chemical industry with nearly 23,000 employees and a turnover of $60 billion US. Adisseo is listed on the Shanghai Stock Exchange.