Editors: Spelling of “Esten” in source’s name is cq.

FAYETTEVILLE, Ark. — Arkansas scientists are part of a national, multi-institutional research collaboration to combat Fusarium head blight, a serious agricultural disease, also known as scab, that affects wheat and barley crops all across the U.S. 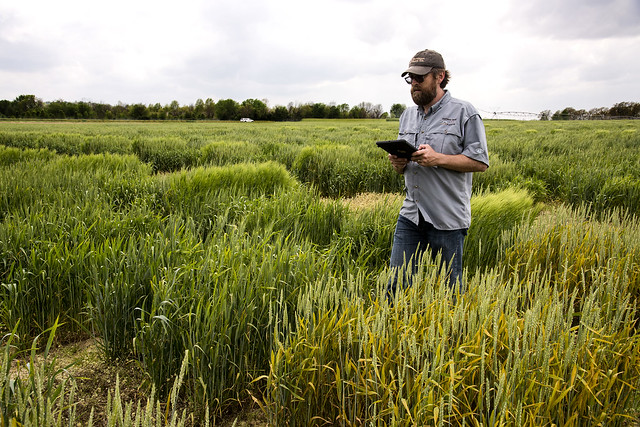 Esten Mason, a wheat breeder for the Arkansas Agricultural Experiment Station, the research arm of the University of Arkansas System Division of Agriculture, participates with the U.S. Wheat and Barley Scab Initiative in his efforts to develop new scab-resistant wheat varieties. He is currently serving on the group’s executive committee.

Fusarium head blight is found in every wheat-growing state in the U.S., Mason said. “It impacts developing grain, causing yield loss and produces a mycotoxin that causes digestive illness in humans and animals.”

Federal regulations provide strict controls on how much of the mycotoxin is permitted in grains for human and animal consumption, Mason said. Its presence in wheat grain can lead to farmers receiving lower prices for their grain, or even rejection of their crop.

“Control is based on prediction,” Mason said. Predictions are based on a field’s history with the pathogen, other crops grown there and weather predictions. Fusarium is a fungal disease and wet or humid environments provide it with ideal conditions for developing and spreading.

“If the risk of the pathogen is significant,” Mason said, “the disease can be partially suppressed with fungicide applications around the stage of heading to flowering.”

The best protection against scab is resistant varieties, Mason said. He works in concert with breeders and researchers across the country to develop that resistance. Two promising Arkansas breeding lines with good resistance may be released as varieties this year.

The U.S. Wheat and Barley Scab Initiative is a partnership of research and industry that coordinates all the links in the wheat supply chain to address Fusarium head blight, Mason said. Those links include state and federal researchers, wheat and barley growers, grain millers and bakers.

Mason is also a member of the Southern Soft Wheat Cultivar Development and Host Resistance group, a collaboration of southern wheat breeders that works within the USWBSI. Previously, he was chair of the group for four years, leading the coordinated effort with more than $3 million in grants.

Annually, the USWBSI awards $7.5 million in research grants, some of which support Mason’s breeding efforts. The money is authorized by the U.S. Farm Bill and distributed through the U.S. Department of Agriculture.

Phenotypic selection is performed in disease screening nurseries on research facilities in Fayetteville and Newport. Test plots are inoculated with Fusarium head blight by scattering infected corn kernels on the ground. They are then misted with sprinklers to increase humidity. This creates an ideal environment for the pathogen to spread to wheat varieties and breeding lines in the plots.

Mason then screens the varieties and breeding lines, including Division of Agriculture plants and those from other institutions and seed companies that participate in the research. He identifies wheat plants that demonstrate resistance. They can be crossed with high-yielding breeding lines to develop resistant wheat lines adapted to Arkansas growing conditions.

Marker-assisted selection uses genetic tests to find breeding lines and varieties that have a gene called Fhb1, which is found in the most resistant wheat plants. Breeding lines with the Fhb1 marker are screened for resistance and advanced in the breeding program.

The sequencing work is in its fourth year and is conducted in cooperation with SunGrains Cooperative, a partnership of six southeastern university breeding programs, including the Division of Agriculture. Each SunGrains partner is also a participant in the USWBSI, Mason said.

Alongside the breeding program, Mason directs the Wheat Variety Testing Program, a part of the Division of Agriculture’s Crop Variety Improvement Program. “We test 4,000 to 5,000 wheat varieties and breeding lines each year,” he said. The tests include Division of Agriculture varieties and breeding lines as well as those from other public and commercial sources. “It’s pretty much anything grown in Arkansas or neighboring states,” Mason said.