FAYETTEVILLE, Ark. — University of Arkansas System Division of Agriculture research in rice may lead to more sustainable crop production in Arkansas and around the world. 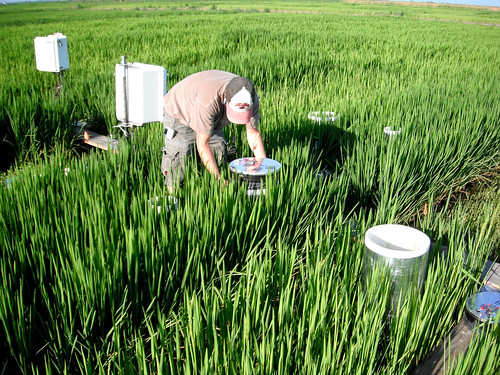 The quest for increased sustainability in agriculture and other industries includes examining greenhouse gases and how they’re generated. In the U.S., only a small fraction of greenhouse gases are attributed to agriculture – 8.6 percent, according to the Environmental Protection Agency. Within that small fraction, rice production is classed as a minor methane source. Nevertheless, greenhouse gas emissions, however small, may have an economic impact on Ag industries at some point in the future.

“Tackling large-scale problems often takes a one-step-at-a-time approach,” said Jean-Francois Meullenet, head of the Arkansas Agricultural Experiment Station, the research arm of the Division of Agriculture. “Research our faculty is conducting, including Dr. Brye’s important body of work in rice, is part of a broader effort to increase agricultural productivity for our farmers, both short- and long-term, while also increasing agriculture’s sustainability.”

With the number of acres of rice grown globally, these small steps can lead to bigger impacts, Meullenet said.

After years of field research, quantifying many of the variables that affect production of methane  during rice production, Kris Brye, professor of applied soil physics and pedology in the department of crop, soil, and environmental sciences for the Division of Agriculture and the University of Arkansas’ Dale Bumpers College of Agricultural, Food and Life Sciences, said he has generated the most comprehensive, replicated, plot-scale data set on the subject for Arkansas.

Research conducted by former Bumpers College graduate student Chris Rogers and current Division of Agriculture research associate Alden Smartt, has shown that choice of nitrogen fertilizer can affect the amount of methane emitted from Arkansas rice fields. Rogers is now an assistant professor at the University of Idaho’s Aberdeen Research and Extension Center.

Brye said that methane is produced in rice fields because the fields are flooded for most of the growing season. “Under flood, the soil becomes reduced to an anaerobic state,” he said. “Basically, the soil loses most of its oxygen content.”

The lack of oxygen in the soil spurs a group of microorganisms called methanogens to feed on carbon and produce methane, Smartt said.

Brye said the floodwater acts as a cap on the soil, containing the methane in the ground. However, the gas escapes by at least two common means. From time to time, someone has to walk through a flooded rice field.

“Sometimes you take a step and a bubble of gas burps out of the ground,” Brye said. “That’s methane escaping because the soil was disturbed.”

Soil burps aside, the main avenue for methane escape is through the rice plant, Brye said. The gas is passively taken up by the roots, transported upward through the plant tissues and emitted into the air.

The type of rice grown also matters. For example, hybrid rice varieities that generally have higher yields, more biomass and denser root systems than conventional varieties, have more metabolic activity. This leads to more oxygen in the flooded soil, which slows methanogen activity.

Some fertilizers add carbon to the soil, feeding hungry methanogens and spurring higher methane production and emission in some soils, Brye said.

Part of the research Rogers conducted during his Ph.D. program compared three nitrogen fertilizers — pelletized poultry litter, with high carbon content; urea, with moderate carbon content; and ammonium sulfate, which has no carbon.

As expected, fields fertilized with ammonium sulfate emitted significantly less methane than urea or pelletized poultry litter. The difference in methane emission made by fertilizer choice  was significantly greater in silt loam soils than in clay soils, Brye said.

The downside is that ammonium sulfate is more expensive than urea, the standard nitrogen source used in rice production, and producers aren’t likely to be able to afford its use as the sole source of nitrogen.

Brye’s reseach continues to examine how rice management practices such as tillage, urease inhibitors and irrigation systems interact and influence the production of methane and other greenhouse gases. Understanding these interactions is needed to assess which farming practices generate the least greenhouse gas.

The results of the research were reported in “Nitrogen Source Effects on Methane Emissions from Drill-Seeded, Delayed-Flood Rice Production,” a paper published in the January 2017 issue of Soil Scienceby Rogers, Smartt, Brye and Richard J. Norman, professor of soil fertility in the department of crop, soil and environmental sciences.